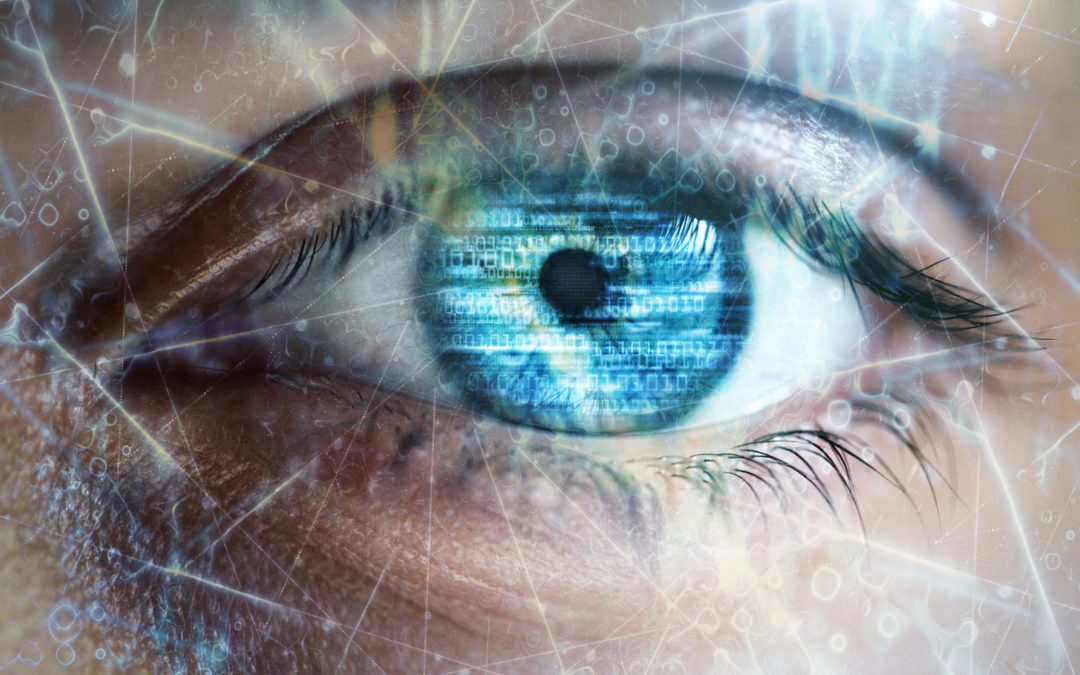 As a shrink, one of the things you pay me to do is to stay attune to the style of defense(s) you deploy in order to manage your experiences, your thoughts, and most importantly your feelings. By doing so, we get a glimpse at the internal forces that influences you to move towards self-protection.

Anyone in my line of work has seen and knows the length our minds will go to in order to “save” you from harm. At the far end of the spectrum, you can have severe dissociative episodes where whole chunks of your life are walled off by your unconscious. It’s staggering to realize the depth to which your mind will protect you from the intensity of your feelings. In this regard, defense mechanisms also reveal to us something about the degree and intensity of your emotional injuries. In other words, you wouldn’t see severe dissociation where there wasn’t also severe trauma.

Defense mechanisms appear to be a universal psychological trend in Sapiens. Everyone uses them. This leads us to believe that defense mechanisms are a byproduct of how our neurobiology is wired. In other words, you don’t have to busy yourself with worry about how to “stop” doing this. That’s not the goal. The goal is to merely observe your patterns, understand why you employ those defensive patterns, and re-integrate with the feelings that the defense mechanism is protecting you from experiencing.

As with everything related to our animal behavior, once we practice how to observe our interior world we see trends emerge. These trends reveal to us important and pivotal neurobiological patterns related to points of emotional injury, how you managed this distress, and the impact your feelings have on your thoughts and behaviors.

Something else that is important to note about defense mechanisms-They are time travelers, they travel through generations and cultures. That’s why we see intergenerational patterns of behavior that migrate from generation to generation over the lifespan of a deeply rooted family tree. You learn, through the power of modeling and imprinting, how to emotionally bob and weave throughout the journey of your life by the elders, prophets, and influencers of your childhood.

This brings us to the final point I want to emphasize about defense mechanism. Most of the time (basically all the time), our defensive patterns are unconscious.  We are not aware that we are “doing” or using a defense mechanism. It is important to understand how and where the unconscious operates in relation to your defense mechanisms because it strengthens your ongoing effort to truly understand how much of your behavior is governed by forces outside of your awareness. Scientists have estimated that most of our decisions, actions, emotions and behavior originate from the 95% of brain activity that is unconscious.

Think about that for a minute.

That means most of our life choices, experiences, relationships, etc. are influenced almost entirely from the neurobiological programming in our unconscious patterns. I reiterate it time and again on this blog so you will begin/continue to really metabolize this idea-The vast majority of how we orbit in this world is influenced by forces that lie past our emotional sightline. But it doesn’t have to be that way. We can practice being more mindful. 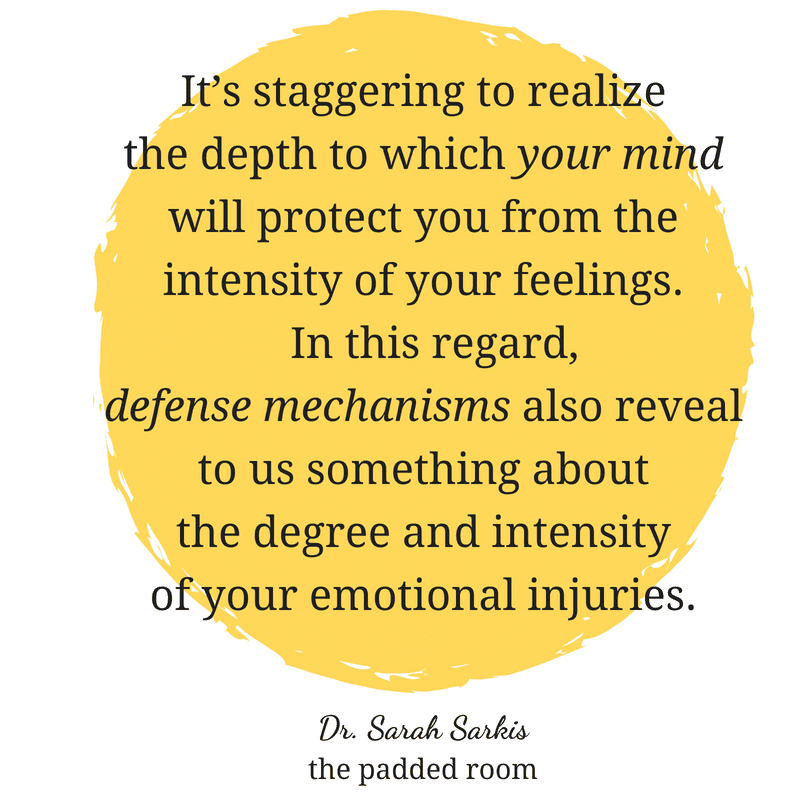 So now that we are all on the same page about what defense mechanisms are and why they are so critical to observe, shall we begin?

Denial is a form of self-deception aimed at avoiding a “reality” or truth that feels threatening or dangerous. It’s a shape shifting of reality that allows you to hang on to a “belief” despite evidence to the contrary. Denial is often deployed, unconsciously of course, when the person feels overwhelmed or vulnerable. Denial is a defense mechanism that appears to develop early, thus it is considered “primitive” referring to its developmental origins.

Denial can be mild, moderate or severe. Where you see denial, you are often witnessing a white washing of reality. In our discussions about the role of the unconscious, I want to highlight that denial is always unconscious. Makes sense, right? If you are aware of it, you are not denying it. Thus, denial has to be unconscious or it’s not denial. Denial, like sabotage, leverages the power of the unconscious to seamlessly infiltrate your perspective.

Like all of our defense mechanisms, denial is a result of the layering of neurobiological patterning and thus runs in families. We learn denial. We watch it being employed, seamlessly into the rhetoric, and eventually we mirror the same cadence in our adulthood. This is how styles of interacting in the world travel through families. We learn these rhythms through the passage of time and the influence of imprinting.

My mother died from denial. I mean, technically, she died from advanced colon cancer. That’s what her autopsy says anyway. But that’s only at the cellular level. At the psychological level, she died from a severe and impenetrable capacity to deny reality. Despite declining health, experts from both eastern and western modes of medicine urging her to pursue a diagnosis, and various other symptom patterns that would send most of us to the hospital, she continued to “believe” the well intentioned, albeit incorrect advice of several well regarded and talented “energy healers”, none of whom picked up on the 9 inch x 3 inch tumor in her colon. She used this form of denial (which often came cloaked as magical thinking) to avoid deeper feelings of fear, sadness, and loss. So deep was her denial, that in the hospital after she had surgery to remove the massive tumor from her colon, it was revealed that her medical practitioners had felt the mass 16 months before and strongly urged her to seek medical attention. But she did not. She continued to deny to herself that anything was wrong. By the time denial had it’s way with her she was dead within six months. This is an extreme example of the power of denial.

But rest assure, for most of us denial is much more mundane. It hides in plain sight. Ever struggle with addiction? Ever loved someone who has? How about every time that ciggy goes to your lips? Ever drank too much and still driven home? Have you ever spent money you don’t have? Ever had an affair and thought to yourself “he/she won’t find out”? These are just a few examples of where denial is at play.

All you have to do is begin to observe your patterns. Obviously, for reasons associated with job security, I think it’s best done in the partnership of a professional. But it isn’t necessary. Don’t let that stop you. Just start. Become still. Create the space each day to just be present in your own skin and bones. Strive for 30 minutes. If you can pair this with some type of heat therapy (sauna is preferred) you can increase your emotional gains when it comes to tolerance for discomfort.

Eventually, through the power of observation and being present in our own experiences, you can start to make subtle, yet powerful shifts in how you orbit around your feeling, thoughts, and experiences.  You no longer have to operate on autopilot as you mindlessly (quite literally) act out outdated and antiquated patterns of defense in an attempt to circumvent your feelings. As you build the muscle of self-observation, you can better know your self and the fuel sources that propel your thoughts and behaviors.

I know. I know. At this point, I’m really starting to sound like a one trick pony. And I might be.

I’ve been accused of worse.

My goal is not for you to feel better, or even achieve some false sense of gratitude (although I got nothing against gratitude. In fact, I have deep affection for gratitude). The goal is to help you better know yourself, know your edges, observe your interior world, and begin to have access to the unconscious feelings that govern 95% of your behavior.

That’s a staggering percentage. Imagine if you could access even just 10% more consciousness. How would your life look? What would you do differently? How would you feel? Observation is your first step. To observe; it’s a verb for a reason. It takes action, effort, and practice.

Next up in my series on defense mechanisms: Passive Aggression.

That should be fun. (See what I did there? Shrink humor.)