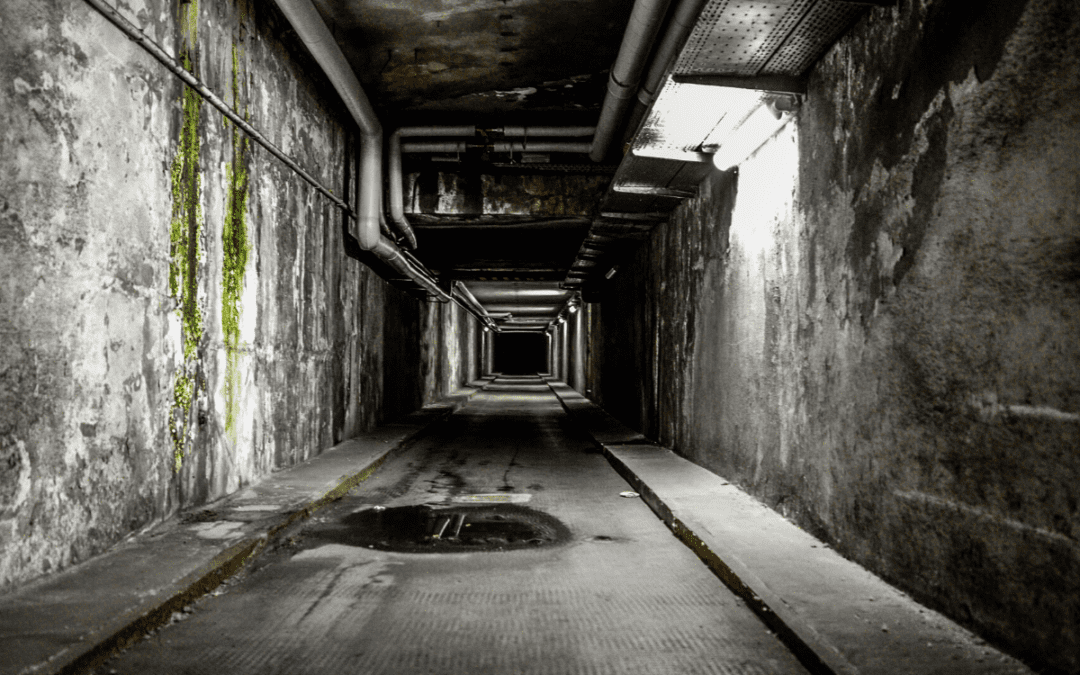 Fear: The Border Town Between Chaos and Control

During my early years of training, I was tasked with assessing people in various inpatient settings. On this particular day, I thumbed through the record of my next patient. I noticed we were roughly the same age; he grew up fifteen minutes from where I lived; we both came from large New England families. There was so much I could relate to, so much we had in common. There was only one glaring difference— he was awaiting trial on multiple assault charges.

There was a buzz in my stomach. A low but consistent drumbeat that kept me alert. I noted the hallway was barren; we were alone. I entered the elevator first and pressed the button. I stepped to the back, as I had been trained to do a million times over in a civilian setting. Before I could even blink, he stretched out his arm, stopping the door from closing. I felt the blood rush to my stomach; the drumbeat began to thump with urgency; I heard the reverberation in my ears.

“Have you read my chart?” he asked.

“And you just gave me control of the elevator panel?” he said, pointing out that I had stepped to the back and left him in the lead position. “Don’t do that again. That’s just stupid.”

My mind was simultaneously careening out of control and everything slowed to a crawl.

This is the most intimate moment I have ever had with fear. A primal experience washed over me like a tsunami breaking on the shore. After this, I became intrigued by what fear does to us in the moments when we are under its spell. There’s an intoxication with this type of intensity. It alters us, changes our consciousness. But as with all forms of intoxication, you’re on the border town between chaos and control.

We are entering that border town today in this installment of The Padded Room, as we strip fear down to its bones.

Let’s start at the beginning. What is fear?

Turns out, that’s a tricky question.

Fear orbits as both an emotion and a feeling. There’s a subtle but important distinction, even though we use them interchangeably. Emotions are instinctual and primary; they are also limited. We only have so many inborn emotions. Feelings are numerous and arrive after a period of reflection. Antonio Damasio, the famed neuroscientist, states, “Emotional reaction occurs automatically and unconsciously. Feelings occur after we become aware in our brain of such physical changes.” Fear, it turns out, tangos in both spheres. Neurobiologically, fear operates as an inborn emotion, like what I experienced in the elevator. Psychologically, fear is a powerful feeling revealing the soft underbelly of our relationship with self-regulation, control, and vulnerability. In order to source its wisdom, we must explore both. First, let’s dive into the universal neurobiology of fear before we explore the idiosyncratic psychology.

Fear originates in the amygdala which then rallies a vast but integrated network of neurologic and physical systems focused entirely on self-preservation. There’s a surge of energy in your body from a cocktail of chemicals, including adrenaline, cortisol, and, most notably, norepinephrine. These chemicals account for the drumbeat in my ears and the slowing and speeding up of time. Fear is so disruptive that it immediately overrides our strong preference for logic, as we dip deep into our mid-brain structures.

For the vast majority of us, the notion of “fearlessness” is a myth, an urban legend, perpetuated by popular culture. Fear is actually built into our complex and efficient survival system. Except in extremely rare cases where the brain develops calcifications in the amygdala, fear is an unavoidable aspect of our human experience. And it turns out, fear is our greatest evolutionary ally. Without fear, people ultimately can’t protect themselves. They are vulnerable to all kinds of physical and psychological risks, of which they have no capacity to anticipate, react to, or learn from. In fact, being fearless is as dangerous to your survival as being clinically paranoid (fear gone wrong). Basically, without fear we are sitting ducks. 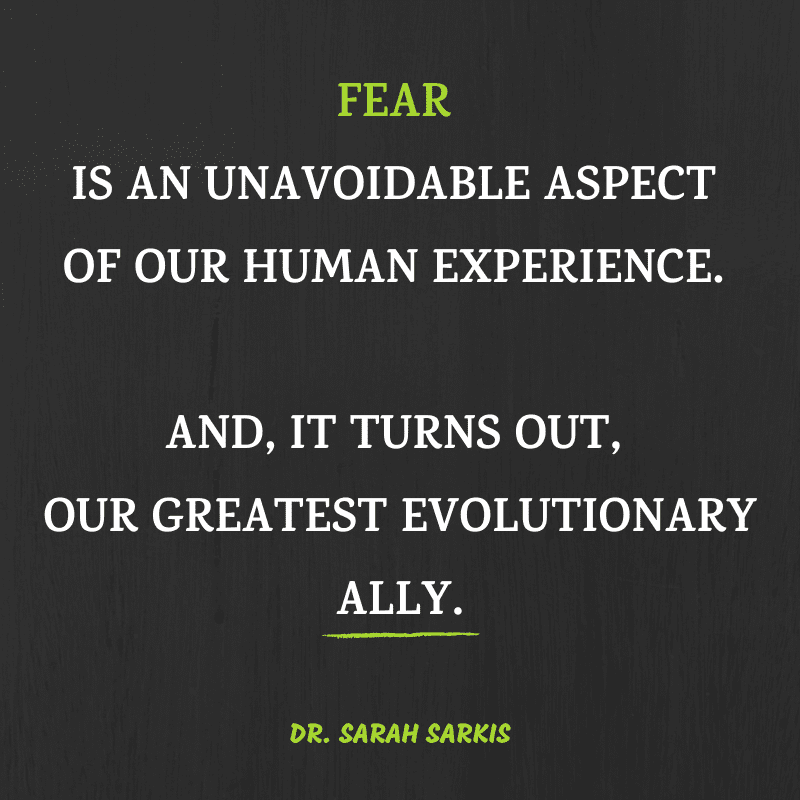 However, knowing the neurobiology of fear only takes us so far in the game of radical self-awareness, which is the primary ingredient in creating long-term change. How people orbit around the feeling of fear is where a lot of the work of self-regulation plays out. Our individual psychologies around fear are most revealing in the pursuit of optimal performance.

But what exactly does fear reveal to us about our interior world?

Fear has deep roots. Our fear response is always reflective of our past. Fear takes us to our guts, it forces us to find our edges— of comfort, of trust, of belief in oneself, of surrender. Fear, perhaps unlike any other feeling, reveals to us how our regulatory system was laid down, from the bedrock up. It tells the tale of your deepest patterns, whose roots travel back to your earliest moments of life. Jerry Colonna, known as the “CEO whisperer” and founder of Reboot Consulting discusses how he looks for “ghosts in the frames” when speaking about how our past operates with profound immunity in the present. In the game of change—where self-awareness and adaptability are pre-requisites— fear is one of the most revealing “ghosts in the frames.” And for those who can observe, everything becomes a teacher.

Fear can be a potent teacher, once we know where to look for it in ourselves. It’s an ancient sage in the craft of tough love. It forces us into a space of vulnerability. We come nose to nose with our frailties, the aspects of our personality that are shrouded in shame. Fear reflects the messages and mottos we picked up along the way from family, friends, culture, and society. I always ask people if they live by a motto. Fear hides in these kinds of spaces, in plain sight. It comes cloaked in all sorts of disguises that trick us into thinking it’s something it’s not. Fear of failure often looks like ambitious risk-taking. Aloofness and humor hides shyness and vulnerability. Anger distracts from fears of worthiness. Avoidance and procrastination obscure imposter syndrome and perfectionism (which I refer to as “shame-ism”). And I’m just scratching the surface here; I could go on and on. You see, with fear you have to know what you are looking for in order to source its wisdom. Half the battle is observing these border towns where you reach the outer edges of your comfort zone.

And yet, I have found that most of us are entirely unaware of how fear has shaped our interior architecture; most of us have almost no access to it as a teacher, a compass.

Fear can be a decisive compass and a cruel warden. Fear offers us opportunities to adapt, to course correct, brace for impact, listen to our instincts, and let the slack loose on control. Without fear and its relationship with trauma and pain—both physical and emotional— we would never learn from our experiences. We would be entirely at the mercy of fate, luck, and good fortune in order to maintain our safety. That’s pretty harrowing if you play out all the possible sources of danger, had we no relationship with fear. The adrenaline junkie is not actually immune to fear. They are, in fact, scared shitless. And yet, they consistently repurpose the disruptive, find the clarity in chaos, and use fear as a compass. Fear brings us right into those interior border towns where opposites exist with equal force— between intrigue and terror, chaos and control, risk and security. It’s in this arena that much of the work of self-regulation and radical self-awareness takes place.