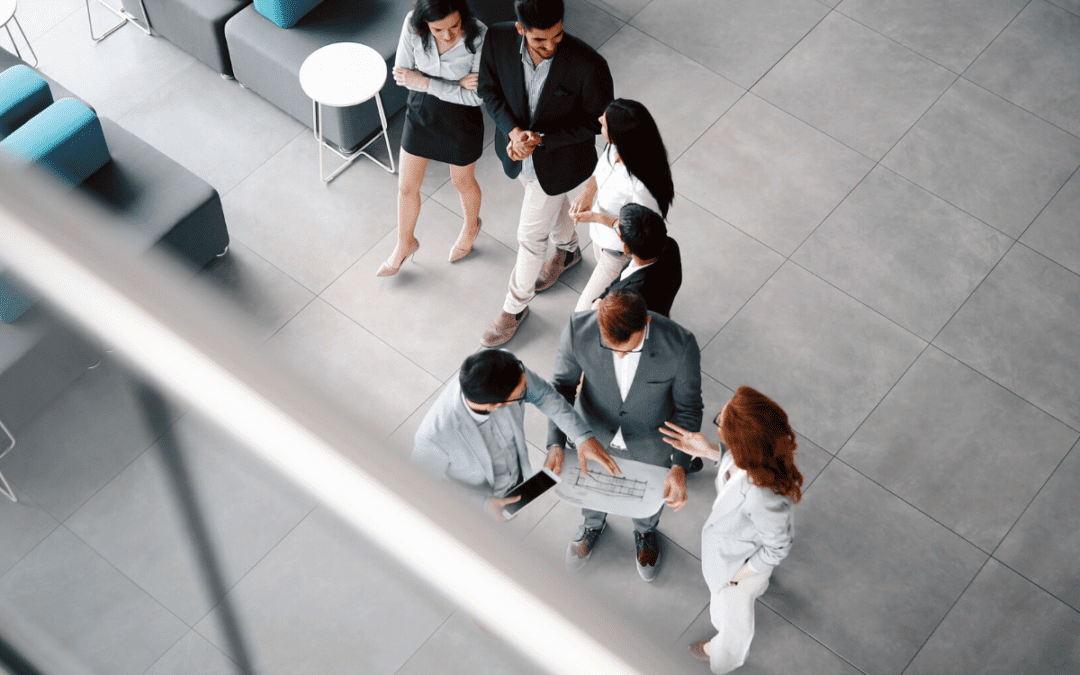 The Pitfalls and the Power of the Pack: How Group Dynamics Shape Your Corporate Culture

What do you believe is the key contributor to your organization’s success and failures?

Do you think it’s your financial viability? Or is it the quality of your brand? Is it governed by the results of the quarterly earnings?

Turns out, organizational culture is one of the most critical factors in your “success.” And, conversely, toxic and corrosive cultures are the root cause of why so many companies and industries are fraught with failure, dysfunction, and inefficiencies.

But how is culture formed?

Culture is actually built from the ground up, not from the top down (contrary to popular belief). No company has ever “regulated” their way to a healthy culture. You can’t create enough top down initiatives to manufacture this type of cohesion.

Sure, as the leader you play a pivotal role. You model the overt and covert rules of engagement. But culture emerges from the trenches; it’s formed in the streets, among the people, and the hustle of group forces. Culture happens in the in between places, the moments between the words. 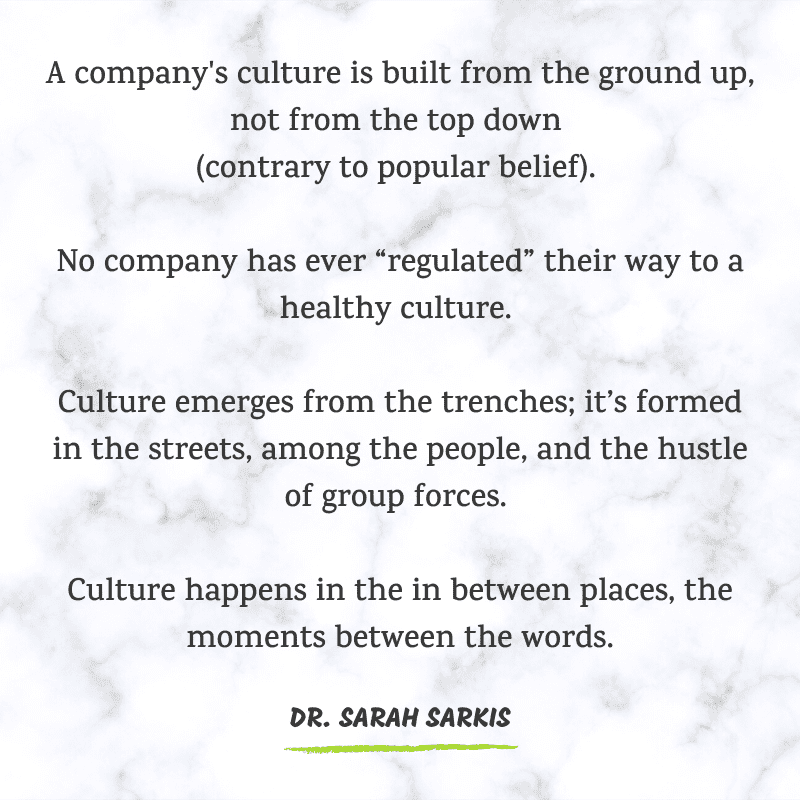 This is the psychology behind Steve Jobs creating the Pixar headquarters around a singular atrium, through which everyone would pass. He knew that this is where culture and group dynamics would emerge.

We feel it when we are under its spell— it intoxicates; it innovates; it bonds. But like all psychological forces, it can be misused, in the dark arts of conformity and coercion, often with dire consequences.

But why is it so potent?

Neurochemically, this is primarily related to the work of oxytocin (released by the Hippocampus)— deemed the “cuddle chemical” by pop culture. It’s true, this chemical is always the culprit in any bonding process—from breastfeeding to Burning Man. It signals safety and security. Turns out, we need these conditions in order to survive, both physically and psychologically.

But you might also be shocked to learn that oxytocin is also why we are susceptible to cult worship and all forms of nationalism. Oxytocin, like all of our neurochemical processes, is morally and ethically neutral. It doesn’t consider whether what you are bonding to is healthy. If it involves deep attachment, regardless of whether that relationship is “healthy,” oxytocin is in the mix.

According to Daniel Coyle, author of The Culture Code, “Normally, words matter. But that assumption is wrong. With groups, words are just noise. Group performance depends on behavior that communicates one powerful overarching idea: We are safe and connected.”

It’s the quest for belonging and chemicals that make group dynamics so alluring and potent.

Most people don’t realize that every group you lead and every team you build are a living, breathing entity. Alliances are built, others are broken, rogue factions form, and silent objectors plot. And by the way, all of this operates unconsciously.

When a group is healthy, supple, and cohesive something truly intoxicating can unfold. Group flow flourishes in this type of environment. When this occurs, the rhythm, pace, and outcome of group processes can be fruitful beyond your wildest imagination. Productivity increases five-fold with group cohesion as the guiding dynamic.

Turns out, group dynamics can also be highly lucrative.

In fact, group dynamics can change the tides of time.

Take, for example, the story of a small startup tech company in the early 2000s, during the height of the dot com bubble. The founders were young, brash, and bright. The organizational design was fast and loose. This design was intentional, including the mandatory Friday Forum meetings where the whole team would debate strategy, products, and ideas. The emphasis was on debate. Dissention and disagreement were expected. And there were other forms of team-building too, like the Friday all company street hockey game, where shoulder to shoulder everyone (including the founders) jostled for victory.

It looked like fun and games. But serious work and innovative technologies were being mined. And the competition was steep. It might be hard to recall— twenty years ago— tech companies came and went in the blink of an eye for seemingly unpredictable reasons. Remember Netscape and AOL? It’s hard to remember a time when they dominated the tech landscape. But they did. Success, and conversely, failure seemed random.

Turns out, it wasn’t. Those micro-decisions related to group dynamics— namely the emphasis on belonging, healthy debate, and team building— are critical in fostering group cohesion.

Oh, and whatever happened to that small startup tech firm with the Friday street hockey games?

They became Google and the rest is history.

However, all too often this is a squandered area of potential. Or outdated and overly simplistic models are implemented. The psych 101 of group dynamics—forming, storming, norming, and performing— are relevant at a base level. But it does short shrill to the true complexity that lies at the heart of all groups. In the wrong conditions, the pitfalls of the pack can turn deadly.

Often, we only recognize the power of pack when it goes horribly wrong— think Jonestown, the Holocaust, and David Koresh. And even then we dismiss these atrocities as something we would never be seduced by.

But remember the oxytocin.

We are all capable of acting in ways we would never dream possible. And yet, we are seduced by the elusive and potent groupthink— objectors are censored, ignored, or silenced through more hostile means.

Ambition can turn to greed. Cohesion can change to coercion. And belonging can pupate to conformity.

The dark side of group dynamics can be effective in getting compliance, but at what cost?

For example, have you heard the real story behind the explosion of the space shuttle Challenger, NASA’s ambitious attempt to bring space travel to the everyday ordinary citizen—dubbed the “Teacher In Space Project” by then President Ronald Regan?

Thousands of teachers across the country threw their hat in the ring— nearly twelve thousand nationwide. NASA chose Christa McAuliffe, a Social Studies teacher from New Hampshire. The PR campaign that blossomed around this announcement breathed new life into the NASA brand.

In the days leading up to the launch, there was a cold snap in Florida. Typical temperatures in January are solidly in the fifties.

Twelve hours before the launch, two engineers from the firm NASA hired to build the rocket boosters called to express “grave” concerns about the unseasonably cold temperature. Apparently, in colder conditions the O-ring can lose its elasticity.

On the morning of the launch, icicles were found on the rocket. The thermometer read 36°F. Roger Boisjoly, one those engineers, later said, “I fought like hell to stop that launch.”

And yet, despite all these warnings, NASA gave it the green light. The engineers were ignored entirely.

All souls onboard were lost.

Turns out, elasticity is critical in the safety of the flight.

The investigation of this “tragedy” uncovered a two-decade trail of concerns about the “deterioration of the O-rings.” These concerns were met with indifference, hostility, ignorance, and anger. For nearly twenty years, NASA suppressed this information, avoided much needed improvements, and censored those that dared to question their approach.

This is the power of toxic culture.

History points to the failed O-rings as the cause of the Challenger’s demise. I suppose that’s true at some level. But from a psychological perspective, toxic groupthink killed those people.

I repeat, the consequences of toxic group processes are expensive, dangerous, and even deadly.

Group dynamics reveal the nuisances, the subtext, and the unconscious patterns that govern and dictate the type of organizational culture you are actively creating.

You can see why it behooves you to be crystal clear on exactly what you are conveying through the culture you promote.

Culture is your legacy; it will last long after your tenure expires.

What will that legacy say about you?

Curious about the exciting frontier of Optimal Performance Consulting? Learn More
Hello. Add your message here.
Yup, there are cookies here too. Continuing to use this site means you accept the use of these cookies.OKPrivacy policy