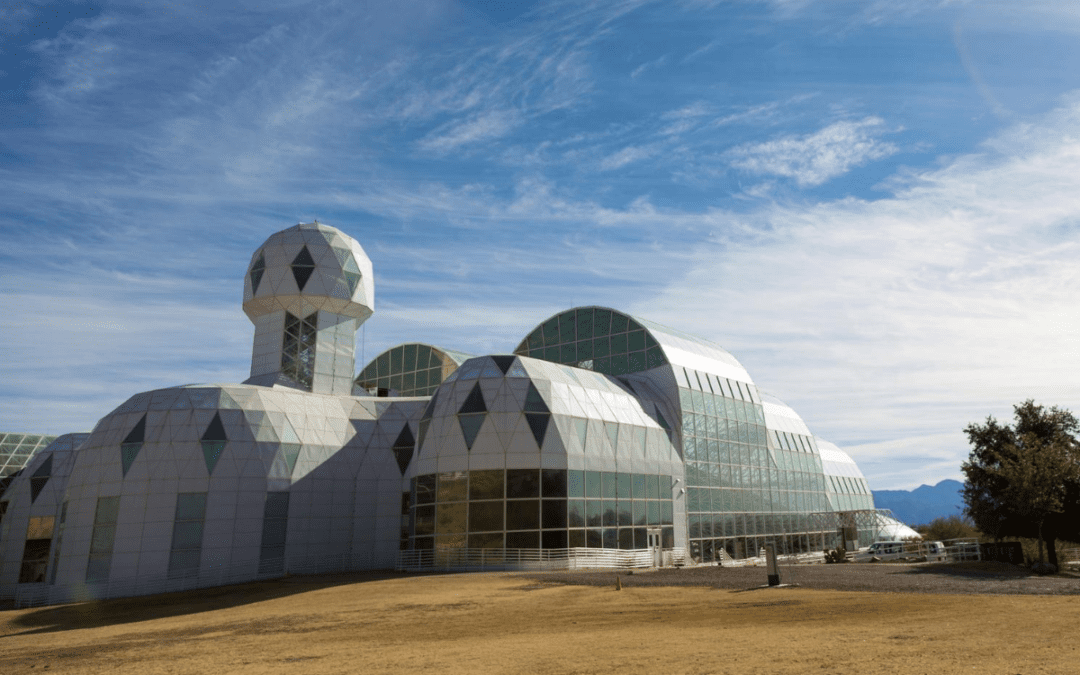 I got lost down a wormhole last week and landed in the world of Biosphere 2.

Have you heard of it?

The Biosphere 2 was a series of honeycomb glass domes and interconnected space-like structures spanning more than three acres in the foothills of the Santa Catalina Mountains in Oracle, Arizona.

Inside the sphere were grasslands, an ocean and coral reef, a rainforest, a mangrove, and a desert. It included 3,800 different species of plants and animals. Humans were merely one species amidst a vast biome of living entities.

On September 26th, 1991, a team of eight entered the unknown inside the walls of the Biosphere 2. The Biospherians, as they came to be called, were a mix of formally trained doctors and “street scientists” (ordinary civilians committed to the mission).

They would not emerge for two years.

Think about that—while many of us are currently crawling out of our skin during episodes of “shelter in place” and mandatory fourteen-day quarantines… two years would feel like an eternity.

Their far-fetched, moon-shot dream was to see if they could curate a biodiverse, closed environment that would replicate Earth, allowing them to observe and experience the interplay between humans and the planet.

It was always the interconnected elements they were most interested in.

Although scientific history hasn’t looked favorably on much of what emerged from the Biosphere 2 (in fact, loads of data has been “misplaced”), it was originally hailed as one of “the biggest scientific projects of all time” by the Scientific Times (1986).

And it’s true, right from the start, there were glitches. Species died off, pollination issues emerged, oxygen levels inside plummeted from 20% to 14%, fungus took over, and cockroaches proliferated—to name only a few. The day in and day out rigor of maintaining the Biosphere 2 was nothing short of herculean.

And the chaos didn’t stop there either. There were management and money issues, leadership transitions, the board resigned en masse, and internal squabbling took root. Alliances emerged, others fractured, rogue factions formed.

This was, after all, reality TV before we had reality TV. Tourists, scientists, and celebrities all made the pilgrimage to observe our humanity through the looking glass of the dome. Even Jane Goodall is reported to have visited the Biospherians in their “curated” habitat.

This was a living breathing experiment; an entity unfolding live. In that regard, it was the opposite of a true scientific process. They didn’t hold any variables constant or have even a hypothesis going in. The mission was to observe and respond to the demands needed in order to survive. The Biospherians were a part of the experiment.

As a shrink, I am struck by the audacity of this endeavor.

Make no mistake about it, the Biosphere 2 project was, above all else, a provocative study of human behavior.

From a psychological perspective, the Biospherians studied and implemented the framework of the famed Tavistock Method of small group dynamics, pioneered by the legend Dr. Bion. (That’s a whole different blog. But enjoy the wormhole, if you feel so inclined.)

But like a lot of moonshot ideas, it was both short-sighted in its execution and wildly ahead of its time in its vision.

Issues related to this chaos, conflict, and control are built into this type of experiment; remember, it replicates Planet Earth. Into the Biosphere 2 went all the uncertainties, the frailties, the volatility, and the beauty that this planet affords us.

But between all the chaos and the controversy, three concepts prove especially relevant to this moment in time:

The Whole is Greater Than Its Parts

We are connected to everything. Literally. We are not separate from the earth we inhabit. The Biosphere 2 project allowed us to drill down to the bedrock of how we are influencing and influenced by the plants, animals, soil, and air surrounding us.

Inside the dome, there were no anonymous deeds.

As one of the original Biospherians remarked, “We had a visceral bond with the physical world.”

A lot of us talk a good game about our connection to the world around us. But we are also complicit in supporting industries and organizations that poison the earth in the name of prosperity, and, somehow incredibly, we delude ourselves into believing we won’t ingest the poison.

We can do this because we are detached from the interconnected relationship between everything. We have all the modern distractions that allow us to wallow and marinate in delusional behavior.

The Biospherians couldn’t afford delusions. They could literally feel with each breath how intimately tied to the earth they were. That’s why the oxygen levels dropped from 20% to 14% as the system adjusted to its ecological surroundings.

And this isn’t a New Age concept of our interconnectedness, either. This has deep roots in science, chemistry, and the biology of our influence on each other as a shared system of cause and effect. This is more along the lines of what Zach Bush is inviting us to observe and understand about the partnership we have with our planet.

The lesson is— How are you impacting the world? Oh yeah, and be mindful of your delusions.

Do you recognize that you are an influencer and influenced by this interplay?

You are a key participant in co-creating the health of the biome here on Biosphere 1. That’s a huge power. Be mindful of how you use it.

Shared Purpose is The Ultimate Motivator

The nature of group dynamics is such that alliances and rogue movements are always underfoot. In fact, it’s a very natural aspect of how our animal operates in community.

Inside the dome, all the normal rules applied.

Deep chasms existed within the team around how to preserve the culture of their experiment. These were factions as deeply held to their identities as say, our modern-day political or religious identifications.

Every day they put aside those differences and worked towards a mutual purpose.

The Biospherians didn’t need to agree with each other to work in synchronicity and cohesion in order to survive.

They had purpose driving their engines.

And it turns out, purpose matters. It drives intrinsic motivation related to autonomy, personal accountability, and group cohesion, especially when times get tough.

And they will get tough.

The Biospherians had vastly different views on fundamental aspects of their time inside the dome. Tensions boiled over, morale got low, friction became a constant. But they had this overarching shared purpose— do the work to keep the biosphere and thus, humans, alive— and it turns out, this is enough to drive cohesion, collaboration, and problem-solving despite the deep chasms.

Anyone living right now on Planet Earth should be in awe of this ability. 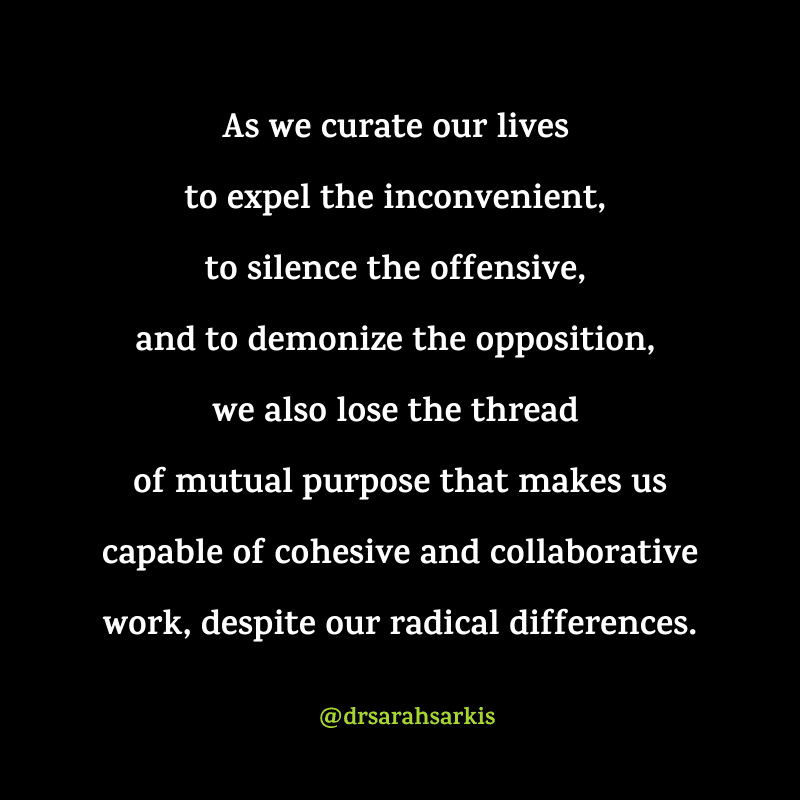 Think about your own life— most of us begin to associate with only the people we agree with on key elements of our lives. The Biospherians sourced mutual purpose amidst the friction. Turns out, this is a skill that requires practice. Practice is code for exposure.

As we curate our lives to expel the inconvenient, to silence the offensive, and to demonize the opposition, we also lose the thread of mutual purpose that made the Biospherians capable of cohesive and collaborative work, despite their radical differences.

Have the hard conversations. Do the hard work to find our mutual humanity. Focus on your purpose.

Purpose will take you further, on a cleaner burning emotional fuel, than any other source of motivation.

The lesson here— what fuels you? In the long game, it matters more than your beliefs.

Uncertainty is the Constant

Life is uncertain. Things are in flux all the time.

The Biosphere 2 project revealed that even in an ecologically curated, closed system, control was an illusion.

As soon as the doors closed, glitches arose. The Biospherians realized that despite all the years of preparation to mitigate the unforeseen, chaos emerged immediately. Hummingbirds and bees died off. Pollination issues became prominent. Cockroaches, of course, reigned supreme. Tackling the everyday changing shifts in the environment was the only constant.

And, in an ironic plot twist, guess what was the most unstable element inside the dome?

Far and away, humans were the most unpredictable factor in the ever-changing dynamics inside the Biosphere 2.

We are notoriously volatile in the face of uncertainty.

This is why I constantly emphasize training our weaknesses. This is the arena in which we really make or break our human potential. In learning to tolerate the discomfort of uncertainty, self-awareness and self-regulation are key.

Again, this is an inside job. 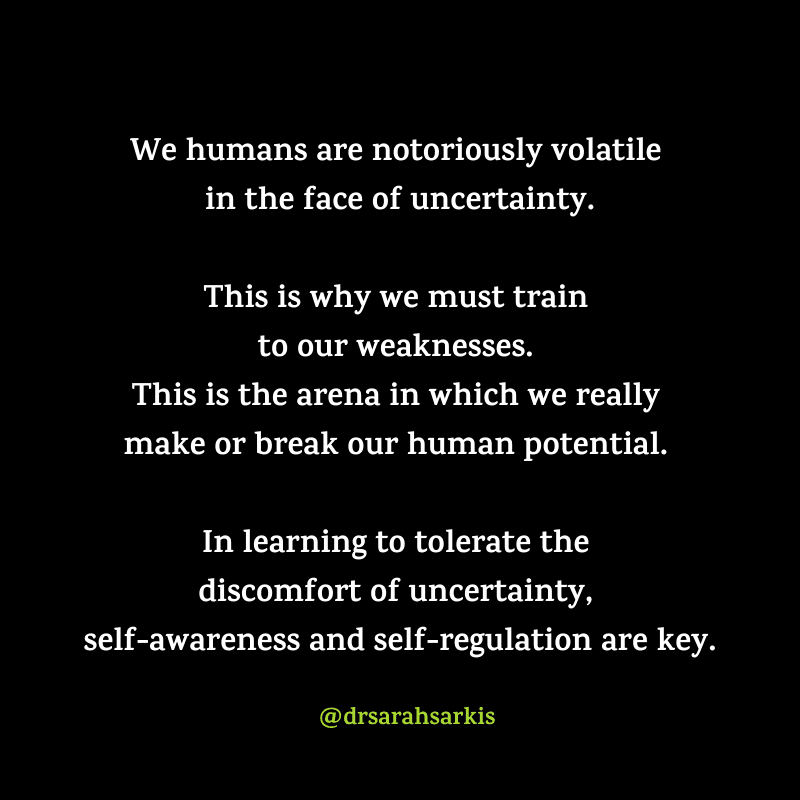 This is not complicated. And it is not easy.

Start with your daily habits— your morning routine, examine your sleep, nutrition, and movement practices.

Then invest in a solid daily meditation practice. Ten minutes. And don’t bullshit yourself, you have the time.

Get outside in the morning and the evening.

And finally, begin to understand the power of your breath; it is our most primitive guide to self-regulation. (Brian MacKenzie is a place to start if this wormhole interests you.)

As always, I root for us.

Until next time, stay curious. Thanks for reading.