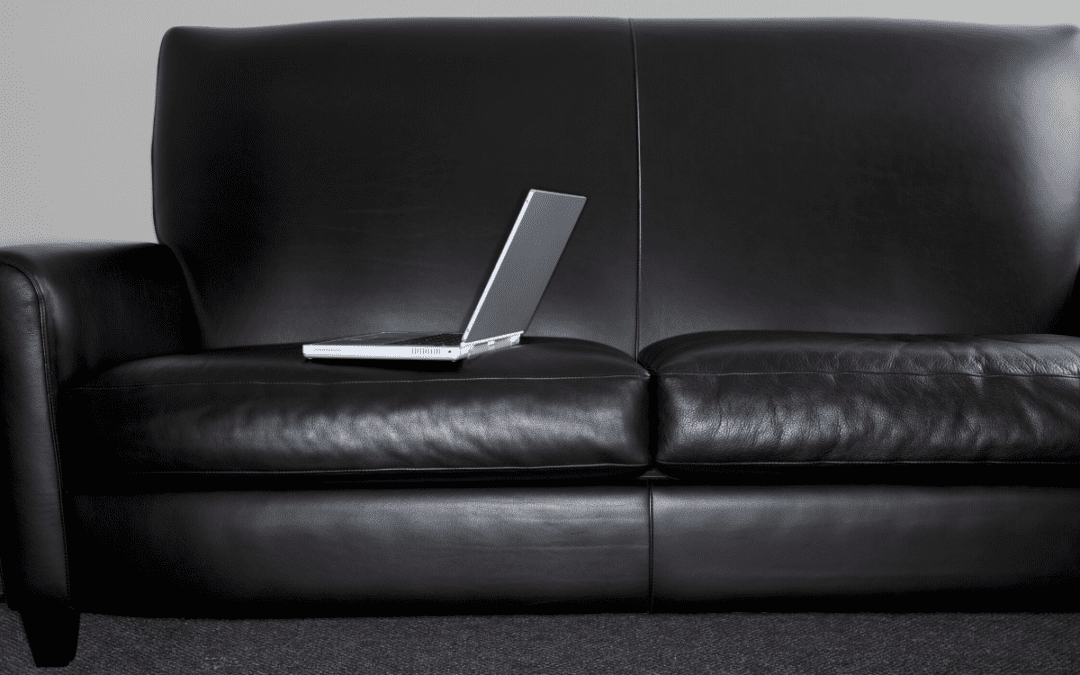 Being a Patient: Lessons From the Other Side of the Couch

When I was twenty-two, I went to my PCP with a growing list of symptoms that were concerning to me. I left that appointment with a ninety-day supply of Xanax.

When I was twenty-four, I went to a different doctor to discuss a growing pattern of distractibility, loss of attention, and deepening lethargy. I left with a prescription for Zoloft.

When I was twenty-eight, I went to a psychiatrist to talk about my lack of motivation and focus. I left with a prescription for Ritalin.

Long before I became a peer, these were my first interactions with the community of well-intentioned physicians and doctors attempting to help me as a patient. If I had taken all of these prescriptions as suggested, I’d have been on three major psychiatric medications before turning thirty. At least two of which have proven, in the decades since I was prescribed them, to be very difficult for people to get off of.

At the time (we’re talking back in the late nineties), I just felt baffled by the fact that every time I mentioned any symptom, I was being given psychiatric medications. Even at this young age, this struck me as bullshit. I said to at least one of the docs, “But this doesn’t feel psychiatric. It feels like something is happening in my body. Is there something we can do to find out why I am experiencing these symptoms?” I wasn’t trying to be provocative; I had no interest in or awareness of how these experiences would eventually shape every aspect of my life, including my career as a budding shrink (focus on wellness vs pathology). Honestly, I just wanted to feel better.

It wasn’t until a decade later that I started to also understand the implicit gender biases that were orbiting behind the scenes (unconsciously) in this reoccurring pattern. I see it so clearly now. The implied message being that my symptoms were “all in my head.” Back then, I didn’t recognize that what I was experiencing was essentially no different than the “Valium housewives” epidemic of the fifties. The only distinction is the generational nuisances of what was being offered to me.

Now, two decades north of the beginning, I see so clearly how my time as a patient prepared me for my life as a shrink.  All the good stuff happens in those murky waters of self-discovery. My symptoms were indications and whispers of imbalances that were wreaking havoc on my body and my mind. It was critical that I really lean in and listen to the them, instead of seeking to silence or suppress them. 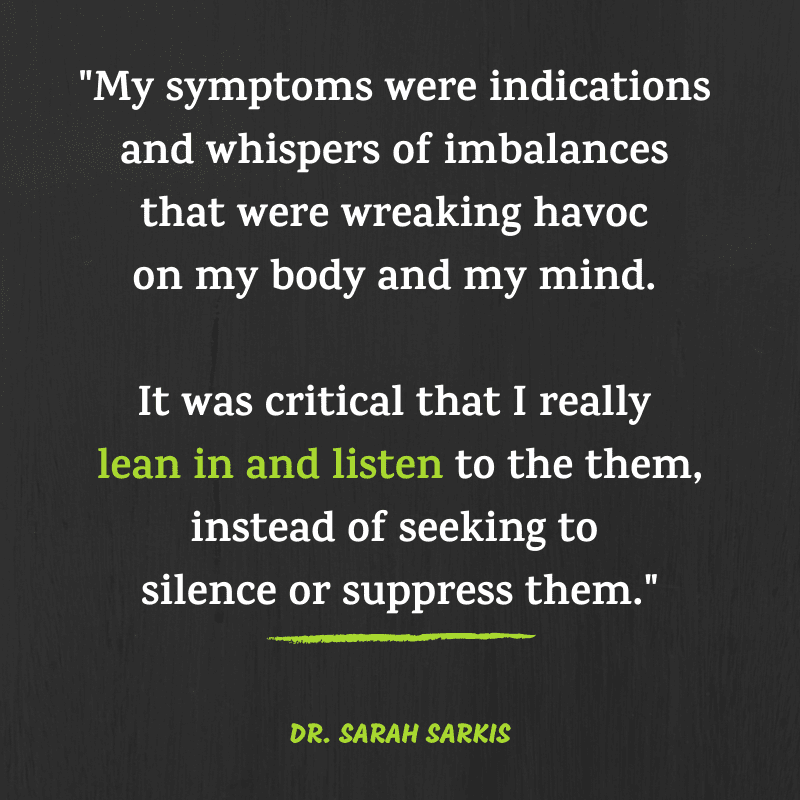 For me, I was able to manage the physical and emotional symptoms using integrative and functional medicine-based approaches, tracing my symptoms back to their root causes of dis-ease. I was fortunate in this regard. I was on the right side of the invisible and mysterious line we call “lucky.”

I stopped drinking at twenty-four because I noticed it made my physical symptoms worse. This isolated me from nearly all of my peers; it was chronically lonely.

I began to really examine my sleep and how it was impacting my mood and energy. I spent most of my twenties “going home” early because I was tirelessly (pun intended) working to repair years of nocturnal sleep patterns that had decimated my circadian rhythms. This only added to a growing sense of isolation from my peers.

I shifted my relationship with food, which had previously been mired in the vice grip of body dysmorphic thinking. I began to see food as nourishment, emotionally and physically.

I entered therapy and stayed for a decade or more. I sat with myself and excavated my past to mitigate its power over my present. It was grueling and brought me to my guts.

All of this was a lot of work and required discipline, of which I had very little when I embarked on this adventure. Like I said, I just wanted to feel better. That was my true north, my driving motivation. My goal wasn’t to develop discipline—that just occurred as a byproduct. In retrospect, I am grateful I was forced to learn this skill: discipline. It is a hallmark feature of my personality now. I can’t imagine who I’d be without this trait. But at the time, I really just wanted to feel better. And I was willing to do whatever it took.

As Trevor Moawad says, “It takes what it takes.” I jive with that, down deep.

This is what I have learned from being a patient first and a shrink second:

If you ask a waiter or waitress more questions about a menu than you do your doctors about your wellness, I urge you to flip that ratio.

Turns out, being a patient is an active and demanding job.

Get in the arena.

Your symptoms are a starting point.

An “X marks the spot” where to start your investigation.

It is not the final destination.

Unless necessary, don’t suppress your symptoms (including your feelings).

You are an N of one.

Be receptive to that feedback.

It’s your compass forward when you feel lost.

You will feel lost.

It’s the only reminder we ever get that connection is critical.

Long before we had verbal communication, we had our feelings and sensations.

Feeling well is totally different than the absence of feeling like shit.

Start to acquaint yourself with that distinction.

Be careful what you allow to become normal.

You are training other people how to treat you.

You are also training yourself.

We make good habits the same way we make bad ones.

We just keeping doing it.

You are not broken.

You are not “fucked up.”

You are suffering and injured.

The process reveals the remedy.

“I’ll be better/happy/content when” thinking patterns.

There is no when.

You only have right now.

And, it turns out, it’s enough.

This is about remembering lost parts of yourself.

The unconscious rules the roost.

You will keep bumping up against the same patterns and habits, whether they are physical, psychological, or both—

Over and over again.

Then it will be something else.

I repeat, there is no destination.

Only you can do this for you.

This is an inside job.

I’m rooting for you.

Author’s Note: And please hear me here— if this is your narrative, I don’t have any judgement on that. I live in the intimate trenches of the human condition. I’ve got nothing against the conscientious use of psychiatric medications to help people manage the idiosyncrasies of personality, temperament, and genetics. I’ve made that call before. I’ve seen a dozen or more people where tactical use of psychiatric medication has saved their lives. This is simply my experience of being a patient and how it shaped me as a shrink.