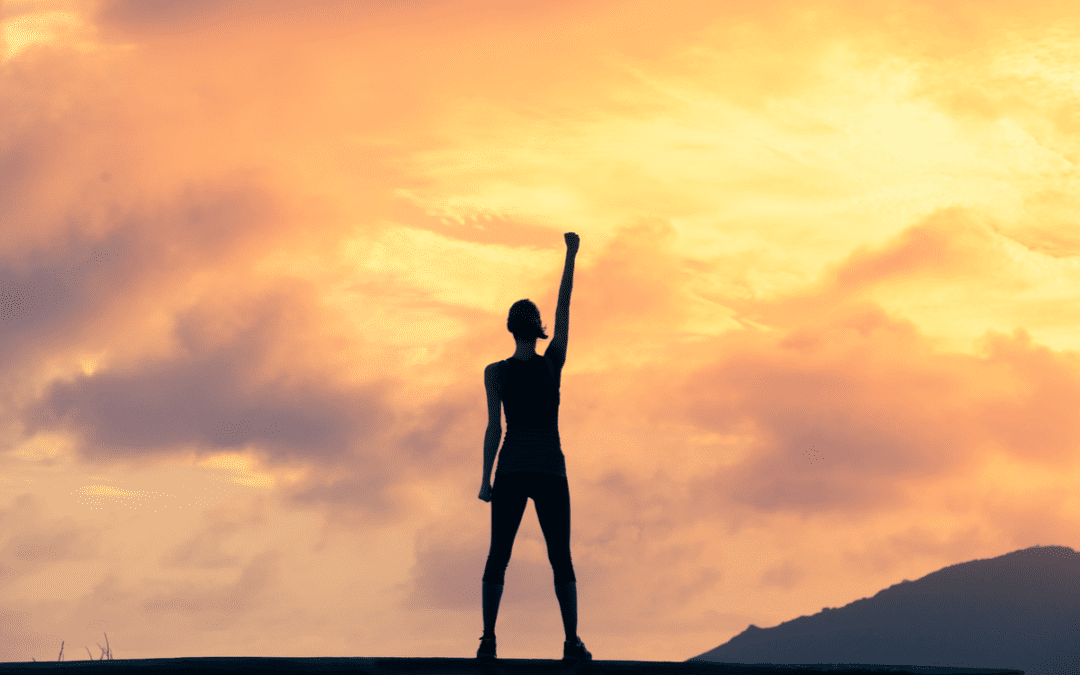 Why Intrinsic Motivation Will Take You Further

I am sharing another article I have written for Steven Kotler and his newest endeavor, The Flow Research Collective (AKA The Collective). It’s an installment in the series Shrink Rap, where psychologists discuss the frontiers of human excellence. Today, I want to explore human motivation.

What is the fuel drives you? What do you burn in order to persevere? And what actually fuels the quest for creativity, innovation, and excellence?

To do all this, I want use the parable of Tiger Woods.

At the age of twenty-one, Tiger Woods won the Masters. And he didn’t just win, he smoked his competitors, breaking virtually all previously held records while defying long held racial barriers. By twenty-four, he had won five majors; by twenty-nine he had clinched ten; and by thirty-two, that number rose to fourteen. He dominated the charts at number one for a whopping 683 consecutive weeks; the next closest player is Greg Normal at 331 weeks. Tiger has gone on to achieve many more notable victories in his twenty-five years on the tour.  And as they say, the rest is history. Or is it? Is this just a story of a prodigy kid and his steady rise to domination?

To me as a shrink, more noteworthy than his victories were his failures: how Tiger navigated the inevitable plateaus and stumbles that any career contains. In the early 2000s, a string of injuries and personal upheaval started to erode Tiger’s otherwise undeterred rise. This is when the story starts to get really interesting. Most of us lose drive when the rise begins to fall. But for the elite, this is precisely when they double down. In the last decade, Tiger rebuilt his swing several times over and persevered through a string of physical injuries that would have put most of us out to stud. Most recently, amid speculations of substance abuse, he emerged triumphant again. I assure you, this is the most improbable reinvention of all. This is the story of what actually motivates humans to strive for greatness (and it actually has very little do with success or accomplishment).

Motivation is the fuel we use to propel ourselves forward. Broadly speaking, there are two types of motivation that psychologists study—intrinsic and extrinsic.

Intrinsic motivation originates from within; you do an activity for the inherent satisfaction, such as for enjoyment (novel idea), for the challenge, or for the thrill of the fight.

Extrinsic motivation is driven by rewards and reinforcement from outside such as money, better grades, and fame.

Both yield results but in very different ways. For a lot of us, extrinsic motivators are the majority of reinforcement patterns in our life. But for those of us in the arena of change, intrinsic motivation is the darling of the duo. To better understand why, let’s first look at the research on extrinsic motivation.

Most organizations, educational systems, and even parenting methods rely primarily on extrinsic motivators. These are the classic sticks and carrots, the “if-then” structures of reinforcement made popular by B.F. Skinner. And these structures have merit for some tasks, namely those reliant on rote and repetitive actions. But at what cost?

Research suggests the ultimate cost of this approach is on people’s sense of autonomy, mastery, and purpose. These three things, we have come to find, are actually critical ingredients for fostering intrinsic motivation. What this tells us is that extrinsic and intrinsic motivation actually have an inverse relationship. As one becomes dominant, the other atrophies. Extrinsic motivators, such as money, are really just “threshold motivators.”  They need to be sufficient—we need enough money to eat, for example—but once that happens, its power declines.

So, what happens to our motivation when extrinsic rewards become our primary driver? More and more external rewards are needed in order to maintain adequate compliance. Neurochemically, it’s the hit of dopamine that actually keeps us coming back for more. Dopamine is effective and intoxicating, but it’s also a quick burning fuel. Over time, no matter how satisfying the external reinforcer is, we eventually succumb to boredom, rebellion, addiction, and even worse, apathy. As Daniel Pink states in his book Drive, “[I]f-then motivation always grows more expensive.”  I would add psychologically detrimental too. That’s why there is almost zero correlation between affluence and happiness. Turns out, you can’t buy contentment. Go figure. And once you have begun to use rewards to manipulate outcomes, you cannot easily unwind that pattern. Buyer beware. 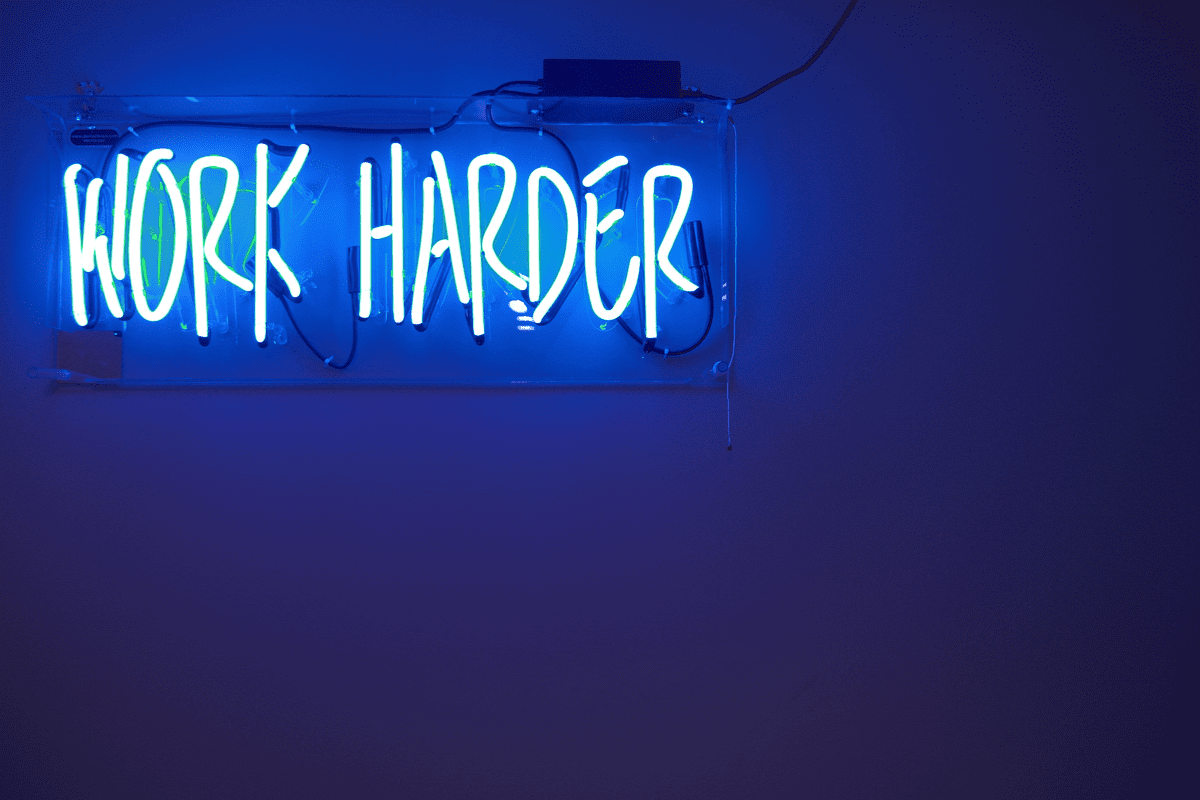 There are effective ways to leverage the upside of rewards, when used sparingly. For example, the CEO of Hawaii Pacific Health (where I live) implemented an effective extrinsic motivator for his “re-orientation” protocol. This was mandatory for all seven thousand employees. He outlined the organizational changes to unfold under his tenure. At the end, he offered anyone who didn’t believed in his vision a generous severance and a stellar recommendation. In other words, he used money and job security (he would give a good rec) to avoid inheriting employees who might be compliance issues. And compliance has legitimate merit at the organizational level.

But let’s not confuse compliance for engagement. To access engagement, we require a very different type of motivation. For this, we must seek intrinsic fuel. The good news, according to Dr. Edward Deci (University of Rochester), “autonomous motivation” is our default setting. Anyone who has ever observed a child can attest to this. We don’t need to use sticks and carrots to motivate a toddler to crawl, walk, and explore the environment. The drive to explore comes built in. But somewhere along the line, this trait atrophies and most of us end up in the sticks and carrots assembly line.

But why, exactly, is intrinsic motivation a better fuel source?

It appears, when we burn intrinsic fuel, we’re exercising all the secondary muscles critical to our need for autonomy, mastery, and purpose. These are the real gems behind why intrinsic motivation yields such profound return on investment. Intrinsic fuel always out performs extrinsic in the long run, emphasis on long. But often, in the short run, it will look like failure, struggle, and regression. This is precisely when the elite dig in; they burn an internal fuel that allows them to creatively approach plateaus and failure, sourcing the lessons. This is where grit, tenacity, and perseverance are born. It’s hard to build these muscles without intrinsic motivation as the driving force. Like I said, no one would have blamed Tiger if he hung up his clubs when the bottom fell out. He’d still be considered one of the best golfers to ever play the game. But with this fuel you embrace these periods of struggle as the most critical time for development and growth.

And what’s more, this is the motivation behind expansive creativity, innovative thinking, and novel problem solving. Using this fuel allows our brains to think big and widen our aperture of wonder. This is the psychology behind Google’s famed 80/20 initiative, where employees spend twenty percent of their time on “passion projects.”  Turns out, this strategy is not only good for morale, it’s highly profitable. A number of Google’s most innovative products are the brain child of those passion projects. You see, intrinsic motivators create an environment where failure and success are no longer inversely correlated. This fuel source rebrands failure, frustration, and plateaus as a necessary process towards mastery. Brilliant, right? 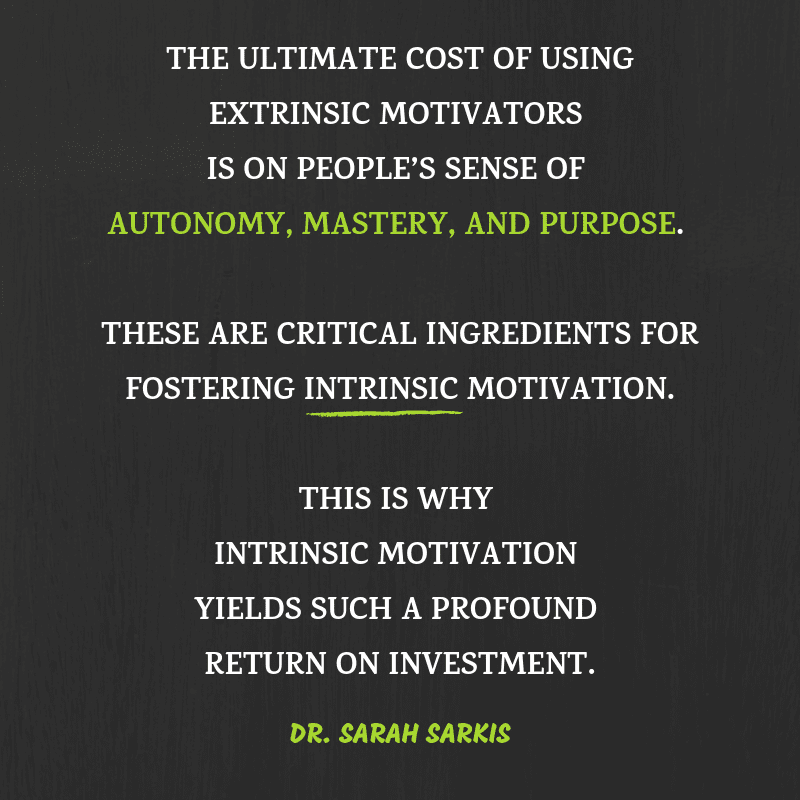 Think about your life, your family, your career, and what types of fuel you burn in order to get results. Where in your life, maybe at home or in your work, can you take inventory and make changes? Deci encourages us to abandon the age-old question, How do we motivate others? in favor of the more beneficial inquiry, How can you foster an environment where people will motivate themselves? I think that’s a really good start.

PS: Yet another compelling reason every organization needs a CPO in the pack.